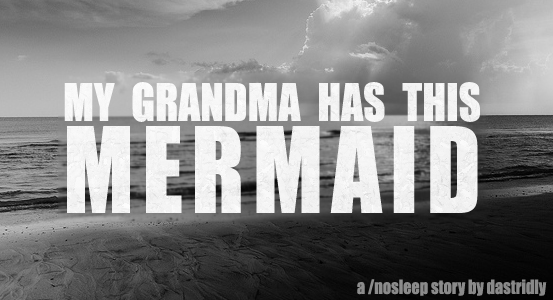 So a little background information: My grandma’s an artist of sorts. She works in a kind of restoration, taking old objects like statues and window frames and decorating them with the shells and detritus she finds lying on the beach. She walks there every day, even though it’s almost an hour away, her pockets full of empty plastic bags that come back full of sand dollars and dried seaweed.

It’s pretty interesting, and she’s being doing it for years, making bigger and bigger pieces as she went on.

Overall, I like her stuff. Going to visit always meant getting to see her new work and gorging myself on the food I can’t get back in the States. It’s been a couple of years since I’ve been here, so I was excited to see the newest one, but it’s…different.

See, she made this mermaid. It’s life-sized, biggest she’s ever done, and inexpertly carved from stone. The face is rough: big lips and pupil-less eyes added with paint and spackle. The tail is thicker than I am, greyish pink and covered in shells. It only looks like a person because it’s vaguely person shaped. My grandma isn’t a sculptor by any means, but her work’s always been about breathing new life into stuff, rather than creating from scratch.

It’s…fine. Obvious really, considering the rest of her work focuses so heavily on the sea, but I just can’t get into it. Maybe it’s the how not right the face is, or the way that the stink of rotting seaweed still clings to her even though all her hair is dried out and crusted white with salt. But ever since we got there, I can barely walk past the thing, just looking at it gives me the creeps. I can’t even go to the bathroom at night, cause I’d have to walk past the corner outside the art studio where it’s propped up, and trust me, it’s even worse at night.

I’m the only one who thinks it’s weird though. My mom loves it, and my grandma’s so proud of the thing. Other people in town love it too; it’s not a big place so when the local artist churns out something new then people tend to get excited. Only, people are getting more excited than usual and there’s talk about setting up an exhibit out in the city.

You think I’d be happy about that, the damn thing would finally get out of the house, but here’s the problem: I don’t think the mermaid wants to go.

I know, it sounds ridiculous, but for the past three nights — ever since the offer from the museum came in — weird things have been happening. I always stay up late on my laptop, and around eleven o’clock, I start hearing noises.

First it’s a soft rhythmic whoosh, like waves. Only it can’t be cause the beach is way too far away. But it keeps getting louder, and faster for like half an hour until it sounds like the house is right next to the ocean.

But as soon as it reaches its crest, it just stops, and another sound starts, and this is the one that scares me. Cause it sounds like something heavy scraping across the floor, something made of stone.

It’s as constant as the waves before. Scrape, scrape, scrape, and it gets softer and softer as the night goes on. Then once it stops, there’s a loud bang, like someone trying to push open the front door. Once, twice, and then they give up. Then the scraping happens again, softer then louder until finally, it’s quiet.

The first time it happened I didn’t fall asleep the whole night, just waiting to hear something again, but nothing. I thought I was crazy.

But in the morning, there was this trail of sand leading away from the door, and it led straight to the mermaid.

Still, I wouldn’t have been worried if it didn’t happen again. All the same stuff, the sound of the ocean, the scraping and the mermaid trying to open the door and get out. Everything was exactly the same, even down to the sand.

I brought it up to my mom and grandma but they didn’t believe me, of course. They don’t hear anything at night, and the mermaid is always in the same place it’s always been in the morning. Her town has the beach on one side, and a desert on the other, so there’s always sand everywhere. And if the front door smelled more like seaweed, then grandma just needed to rinse her shells out better before she got into the house. They almost had me convinced that I had just made it up, even though it’d happened twice.

Just in case, I went to bed early last night to try and miss it, but I was just too jittery. Soon, I heard the ocean again, and the scraping. Only this time, it kept getting louder, and louder, and then the bang, much louder than before.

It didn’t sound like someone was banging on the front door anymore. It sounded like they were banging on the door to the art studio, the one right next to mine.

When we woke up, the door to the art studio had been pushed open, and I know we’d left it shut at night. They laughed when I told them it was the mermaid.

I’ve left the front door unlocked tonight. But just in case, I put a chair in front of my door as well. It doesn’t lock, so something heavy would be able to push it right open.

It’s almost eleven now, and I think I can hear the ocean.